What is static electricity?

Static electricity is a force that can be encountered and generated from the existing earthly elements in their natural and original form such as: solids, liquids and gases.

Regardless of the shape, form and state of the element, their interaction with each other still generates static electricity under certain conditions.

According to Britannica: “ Static electricity is a familiar electric phenomenon in which charged particles are transferred from one body to another. For example, if two objects are rubbed together, especially if the objects are insulators and the surrounding air is dry, the objects acquire equal and opposite electriccharges and an attractive force develops between them.”

We can all relate to the common life experience of a static electricity discharge (or static shocks), which results in a “shock sensation”, a slight noise of a spark and sometimes the spark can even be visible. This discharge of energy is caused by a charge separation.

Moreover, there are multiple types of electric field discharges such as: brush discharge, corona discharge, the arc discharge.  However, they occur in places where there is usage of high voltage equipment, and where the current flows and causes the ionization of a fluid, such as air, to surround the conductive object that has an electrical charge.

But, what causes static electricity?

As it was emphasized in the description from Britannica, the dried air surrounding the objects’ bodies (the level of relative humidity) influences the appearance of static electricity.  In this process, one of the objects will lose its electrons (-) and will thus have a positive charge (+), while the other will have negative charges.

Normally, the number of negative pole electrons and the number of positive pole protons are the same, and an electrically neutral stable state (0 V) is maintained.

When a substance or an object become unbalanced in electrons and protons, it will lead to the occurrence of two phenomena that participate in generating static electricity:

However, what also plays an important role in the development, discharge or prevention and minimization of static electricity is humidity.

In a humid environment similar to the status of the bathroom while taking a bath, there is a high level of moisture contained in the air. There is a lot of moisture present on the surfaces of the surrounding objects. In this case, static electricity will escape into the atmosphere through the buildup moisture without accumulating and charging itself on the surfaces of the objects.

Thus, the quantity of moisture that can be encountered in the air, also called absolute humidity, is a factor against static electricity. The way in which we measure humidity is through relative humidity. This way, we can observe the percentage of humidity in the air, however, another point to be taken into account is the temperature. For more information about the difference between absolute and relative humidity, click here.

At what humidity does static electricity occur?

When we hear “Humidity 0%”, it actually represents the “relative humidity”. And the “absolute humidity” is the amount of water contained in the air.

As an indication, it is often said that “If you set the humidity to 50% or higher, it will be a countermeasure against static electricity”. But 50% of humidity means 50% of relative humidity. Even if the humidity is 50%, the amount of moisture (absolute humidity) contained in the air varies greatly, depending on the size of the room, the airflow and the temperature at that time.

What type of material counters, diminishes or prevents the effects of static electricity?

In order to prevent issues caused by static electricity, various anti-static measures can be implemented at the production site. One of them is selecting the proper materials that do not generate energy, as they are not a conductor. From the list of materials that can be utilized as insulators,  to act like transfer of electrons, we can mention: plastic, cloth, glass. On the other hand, materials such as metals, are considered electrical conductors and thus, they lose their electrons faster.

How do you discharge yourself?

Another suggestion would be the implementation of an ESD mat. As the mat is connected to the electrical grounding, this will assist the worker to discharge or drain the static charges upon touching it or walking on it. Through this process, there is a higher potential of reducing or minimizing the static charges without impacting the surroundings, the products and working materials, such as the electronic devices or the electronic equipment. Also, the material of the mat will assist with draining the excess charges created due to the friction between walking with the shoes and the mat.

How to ensure that the surfaces within an environment are anti-static?

In order to function, exist or work within an anti-static environment, there are several methods that can be implemented. You can either:

As a manufacturer, doing nothing, can sometimes have severe consequences, especially when it comes to a static discharge. Electrostatic incidents, such as device destruction or fire ignition, are everywhere at every corner.

For manufacturers, these incidents will have an impact on the production efficiency (machine destruction, fire ignition, etc.), the safety of their workers and the quality management (product defects, mounting errors, etc.)

Investing in anti-static equipments is often a priority for sensitive working environment and factories.

Even though you can purchase goods or improve your installation to release and/or neutralize the generated static electricity, these are corrective measures.

Between the three measures (releasing, neutralizing and preventing), the best way is to prevent static electricity from happening.

Let’s review the most common issues that can be encountered in sensitive manufacturing processes:

The solution to suppress and prevent ESD is to increase the humidity level indoors. Keeping a proper humidity all year round helps the generated electrostatic to be quickly dispersed and released into the atmosphere. Proper humidity makes static charges potential lower and decreases the creation of electrostatic discharge.

That is the reason why we recommend a humidification system that can assist into increasing the amount of moisture contained in the air (absolute humidity).

These issues appear because of the inability to control the humidity level and the temperature within the manufacturing area. However, the management and generation of humidity within a working environment can be artificially induced through the installation of a proper humidification system. By doing so, this will be a measurable and valuable component against static electricity.

What is the solution that Ikeuchi proposes?

Our industrial humidification system sprays Dry Fog with an average droplet size of 10μm or less. Dry Fog does not wet floors, walls and machines, nor rust them. The AirAKI® is an energy-saving humidification and air-cooling system.

In sensitive working environment, there is huge amount of humidification and air-cooling needed but the conventional atomizing system cannot keep the factory with constant humidity. By analyzing the existing condition of the facility (e.g., room size, air refreshment ratio, factory layout, local climate, etc.), we offer the suitable installation to prevent ESD issues and reduce the defect rate. In addition, we advise to use RO water to reduce the maintenance of nozzles and, therefore, the maintenance cost.

Systems / Products used for this solution 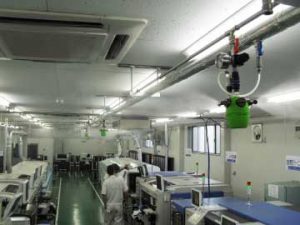 We’ve covered the topic of static electricity, its consequences, and what to do to prevent ESD in several articles in our News section. If you want to learn more about this, here is our compilation of articles: