The Taiko-en is a strolling garden in the Tsukiyama style with many historical stone towers, pagodas, and lanterns. Filled with nature and amazing greenery landscape, this garden is an oasis in the heart of the city of Osaka where people come to escape from daily routine.

In 2019, Taiko-en celebrated its 60th anniversary. The idea was to enhance the existing garden to reveal its full beauty even at night.

Customer’s request: To enlighten and enhance the garden at night

The Taiko-en Garden is a garden where the flowers and green nature of the four seasons shine vividly, keeping the same atmosphere of when it opened 60 years ago. However, the main issue was that it was getting too dark at night.

The facility is often used for weddings, as many customers like the Japanese atmosphere and Japanese gardens. However, it happened sometimes that customers request to celebrate their weddings at night while still enjoying and looking at the historic garden. But there was no lightening installation which made the scenery pitch black and you couldn’t see anything. Therefore, there was an urgent task for the facility to implement a solution that would focus on enlightening the garden at night and keep the full potential of its beautiful historical landscape.

Why using Fog to enhance a garden at night?

When visiting the garden of Yuushien in Shimane, the management of Taiko-en garden were impressed by the staging of illumination and clouds of fog.

“The results were overwhelming. I didn’t know that the light (illumination) and the fog could blend together so well! And that’s the moment that impressed me.” 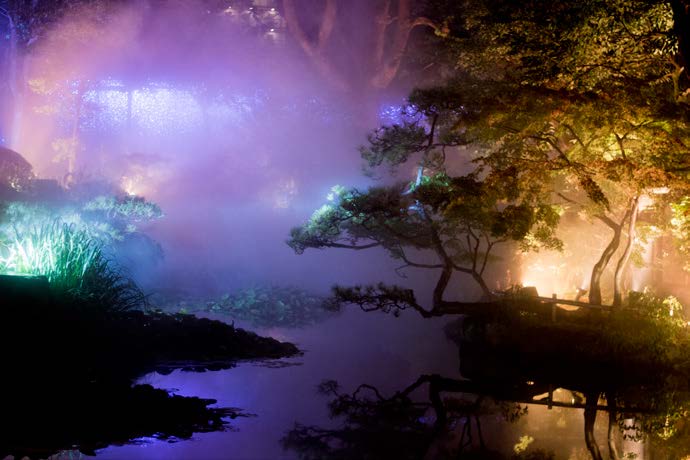 Not only was the illumination beautiful, but the sea of clouds created by the fog was giving an ethereal beauty to the Japanese garden. It reminded them of a natural mist scenery at the Oirase mountain stream in Aomori. The results were astonishing, as pure as natural fog.

After this visit, they wanted to test on a small scale first at the Taiko-en garden. With the goal of completing the work over the next three years, the renovation of the garden has begun.

Product used for this application

To create a natural fog scenery, IKEUCHI recommended to use hydraulic hollow cone nozzles as a Cool Fog unit. The installation was designed to merge with the environment.

The Cool Fog unit can produce a “Semi-Dry Fog ®” with water droplets of 10 to 30 μm. It can be used for staging of audio and visual effects by combining the fine fog with light, sound, and videos. It is also used for cooling against heat waves thanks to the evaporation of the small droplets, or prevention of dust pollution by sprinkling water. 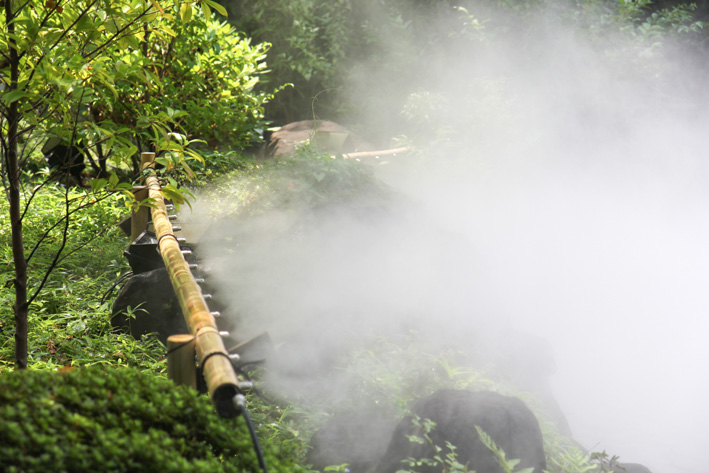 Installation at the Taiko-en garden

The first trial of the illumination with fog happened during an annual event.

Every year from the middle of May to the end of June, the garden holds a firefly viewing event. But fireflies have a short life span and the number of fireflies dwindles towards the end of the event. Therefore, this year to divert the attention, they installed illumination with fog on a small scale.

The installation was a success! The feedback were positives with many people reporting that the new staging was better than the previous years with the lack of fireflies.

After this firefly viewing event, the illumination event began. The most difficult part was to find the right balance between the “flamboyance” and the “wabi”, which represents the simplicity and quietude existing in the rustic beauty made by nature. The goal was to create a space that young people could enjoy, without adding too much glitter and glamour that would spoil the original beauty of the Japanese garden.

The solution was to combine traditional Japanese colors for the lights to the natural looking fog. The choice of colors gave to the garden a vivid but not too flashy atmosphere. And most importantly, the fog set the mood for the entire garden. The way the light was projected onto the floating fog was very magical.

“The floating fog at the time of dusk is very beautiful.”

The additional benefit was the view from the Yodogawa-tei restaurant on the banks of the pond. From there, the customers could also see the fog wavering in the garden at night, giving a mysterious and romantic impression. 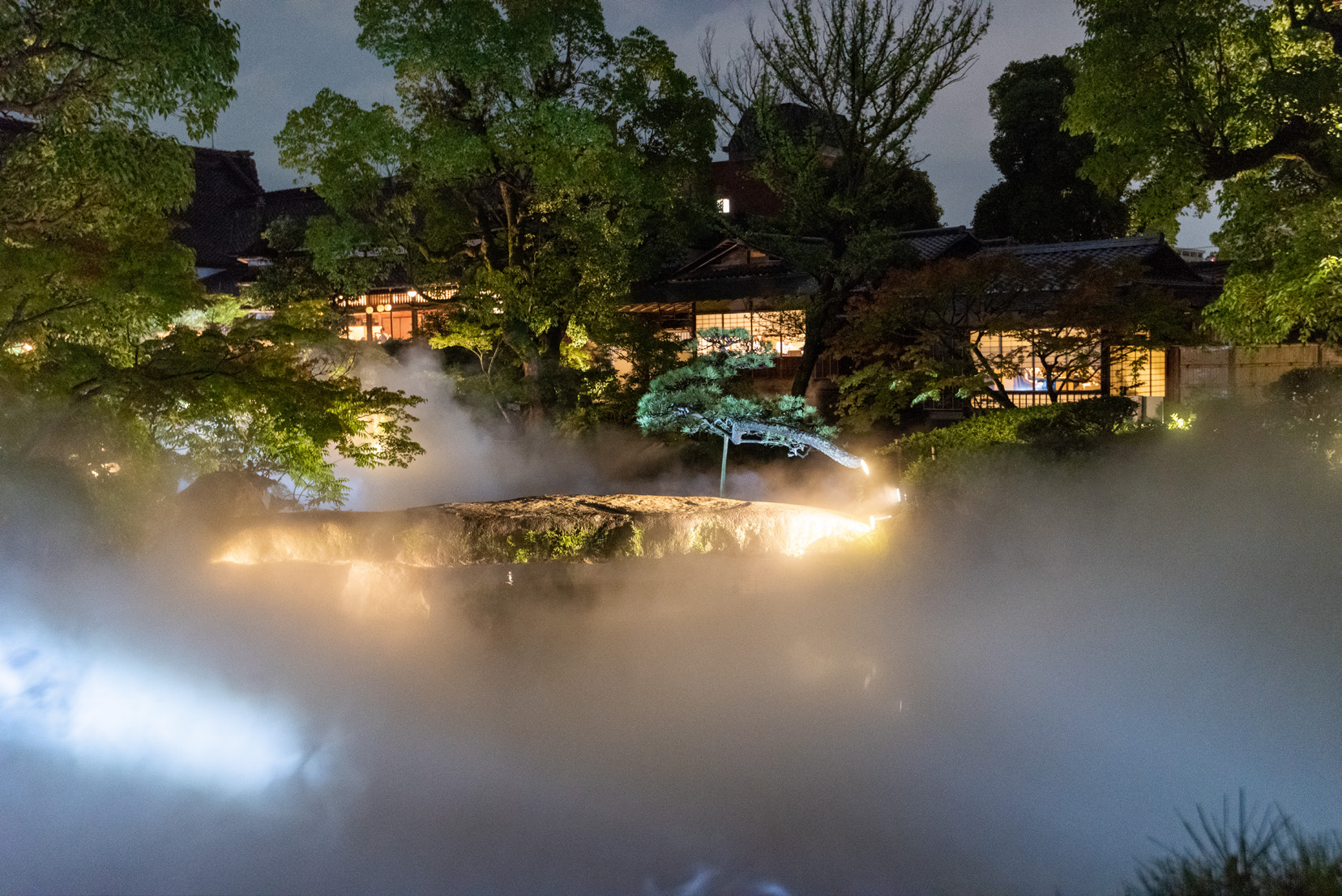 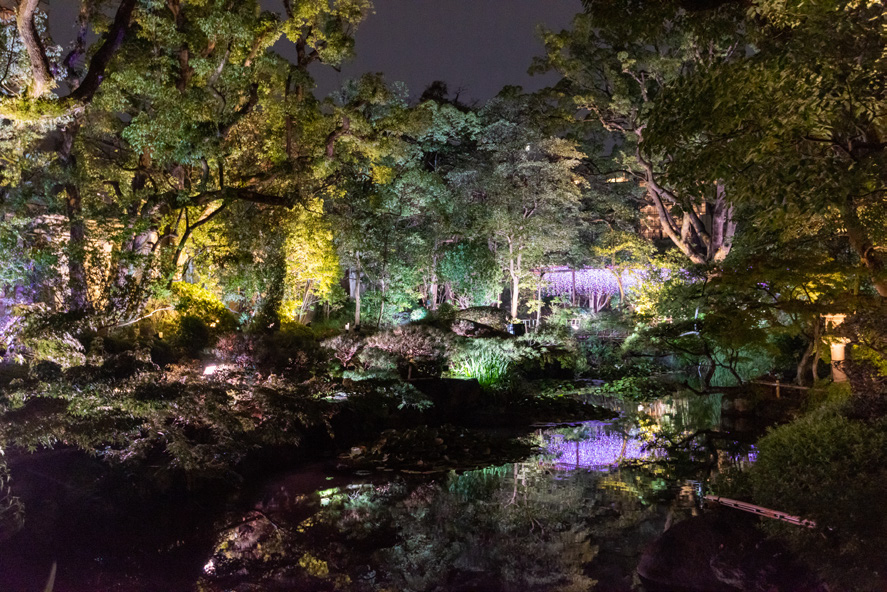 Results of the illumination event

As it was a successful installation, the garden started to promote “The Night Garden of Taiko-en has been reborn”, hoping that this will lead to repeat visitors.

Even though the bridal business is shrinking year by year, the Taiko-en garden had an increased number of visitors as couples thanks to this installation. 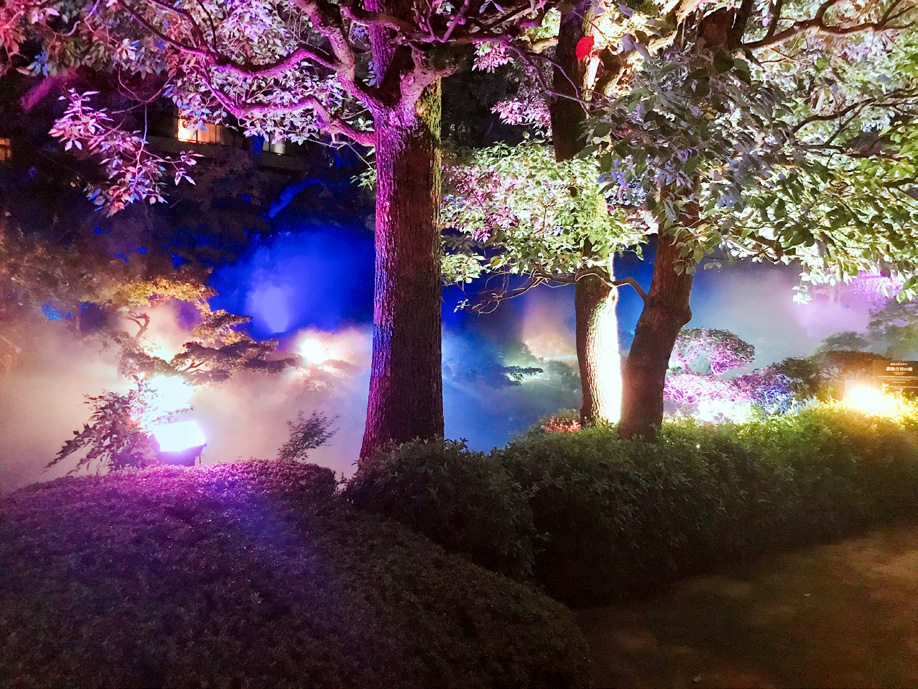 “Harmony of light, fog and garden. The cloudy sea of fog created a vivid but not too flashy atmosphere.”

Since the introduction of illumination and fog, the number of couple customers have strongly increased. As a result of revitalizing the garden at night, the number of customers visiting on a date increased. And hopefully this will increase the opportunity for future brides and grooms to opt for the Taiko-en garden for their ceremony.

Taiko-en garden in the future

Due to the success of this installation for the bridal business, the garden is now thinking to expand their opportunities to the “Anniversary business”. Since its opening, 50,000 couples have been married there. Therefore, there’s an opportunity for those couples to spend their milestone anniversaries at the garden again.

The three-year plan of the garden’s renovation is still on-going. To complete the garden in preparation for the reopening of the adjacent Fujita Museum, the final goal is to create a space where people can see the art works and see the garden.

Keeping the traditional garden while continuing to take on new challenges is the most important for the management of the Taiko-en garden. That is why Fog is indispensable for that challenge. The garden will continue to brush up to create a beautiful space in which the light, the Fog and the garden are in total harmony, until reaching 100% satisfaction on the end result. 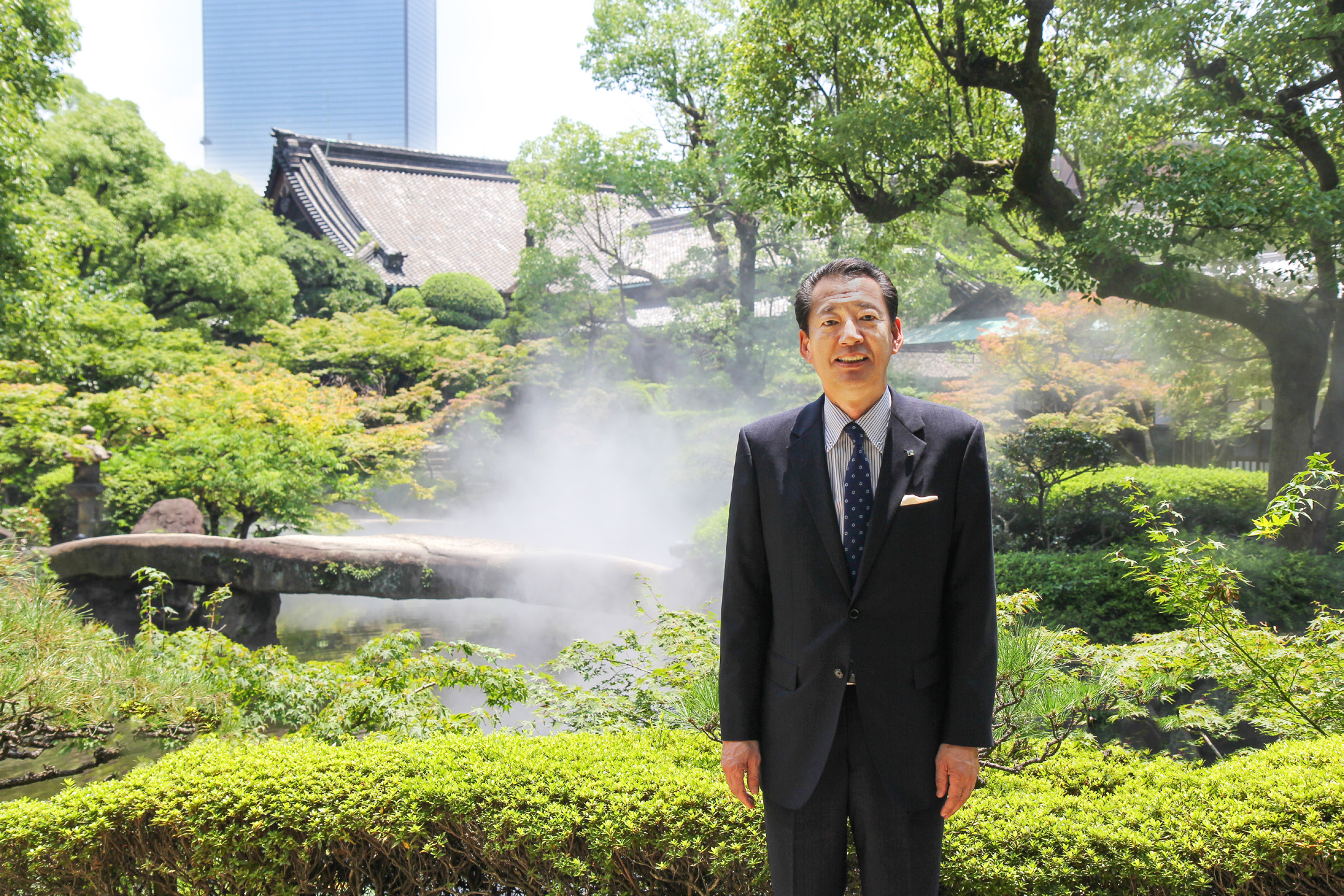 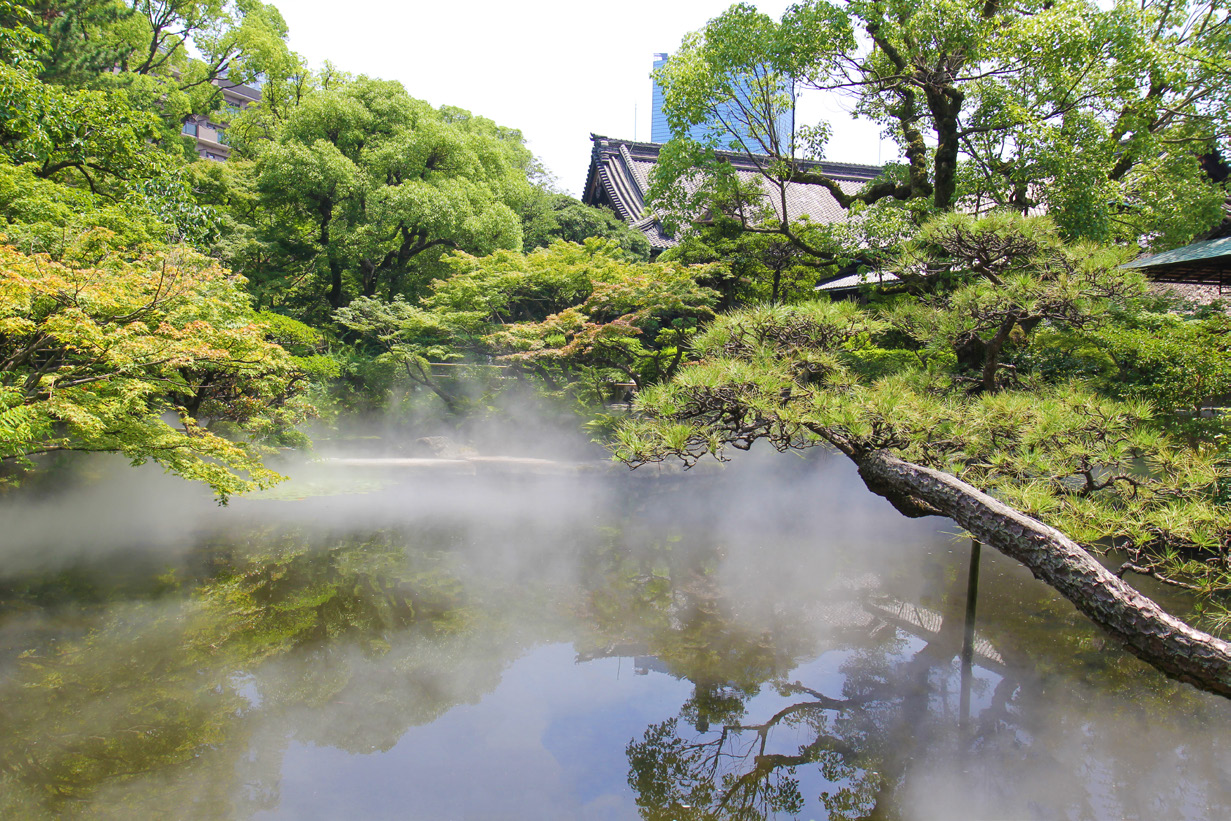